As alumni you are very welcome to join one of the thriving sporting sections. Three of them are based at the Edward Alleyn Clubhouse in Burbage Road. There is also the Golf Society and the Hockey Club.

We are a Charter Standard club offering competitive 11-a-side football for adults. We are founder members of the Southern Amateur League which plays across London. We are always keen to welcome new members. Please contact us to find out more.

Pre-Season training: July to August at The Edward Alleyn Club.

Teams: 7 teams on Saturday afternoons (we play in the Southern Amateur League and Cup as well as the AFA and London Old Boys Cup competitions). We have a veterans side which play Sunday mornings. We have sides in the highest standard of this league all the way down to the lowest!

As a small, friendly and sociable club, we welcome new members of all abilities. Please feel free to come down to one of our sessions (either coaching or Club sessions) to find out more about us.

Club activities:
Drop-in club sessions on Wednesday evenings from 6.30 pm and Sundays 10.30 am - 1.00 pm throughout the year. We also organise a number of social American tournaments during the year.

We welcome players of all ages and abilities, and we are always delighted to meet new potential members. Find out how you can get involved our friendly, sociable south London cricket club.

Junior teams: Year 2 to Year 10 squads, each with a team playing in the Surrey Colts League.

Junior practices: Midweek evenings at the Edward Alleyn Club (see the Juniors section of the cricket club website for details).

Senior subscriptions: £120 annual subscription (£10 monthly standing order) as a member or £10 per match as a guest.

The Edward Alleyn Golf Society is open to all former pupils of Alleyn's School.

The Edward Alleyn Golf Society is open to all former pupils of Alleyn's School. The Society schedules a full programme of events every year which is confirmed by the AGM in early December.

The Society holds 5 meetings each year between May and September, and plays matches against Dulwich & Sydenham Hill G.C., Alleyn's Pupils, Old Alleynian G.S. and Alleyn's Staff. There is also a singles knockout competition which runs through the summer.

Due to COVID19 and the associated safety rules, all events in 2020 have been postponed until 2021, except the AGM & Annual Dinner to be held in December.

The Society Committee currently consists of the following members:

If you are interested in becoming involved with the Golf Society then please contact the Honorary Secretary George Thorne, email eagsgolf@virginmedia.com.

For a flavour of the Society and its activities, please see the commemorative magazine which the Society produced for its 200th meeting.

Want to play hockey in south London for a welcoming, friendly and competitive club? 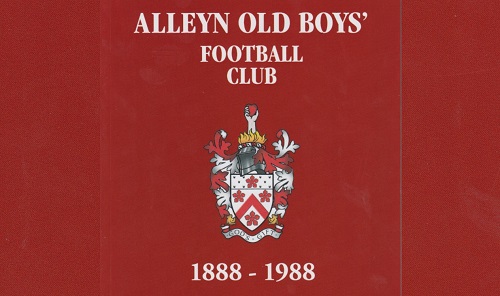 Micky Stewart OBE (Tulley's 1943-51) has been honoured for a lifetime dedicated to cricket with the renaming of the Kia Oval Members' Pavilion.