Is this the Real Life..? 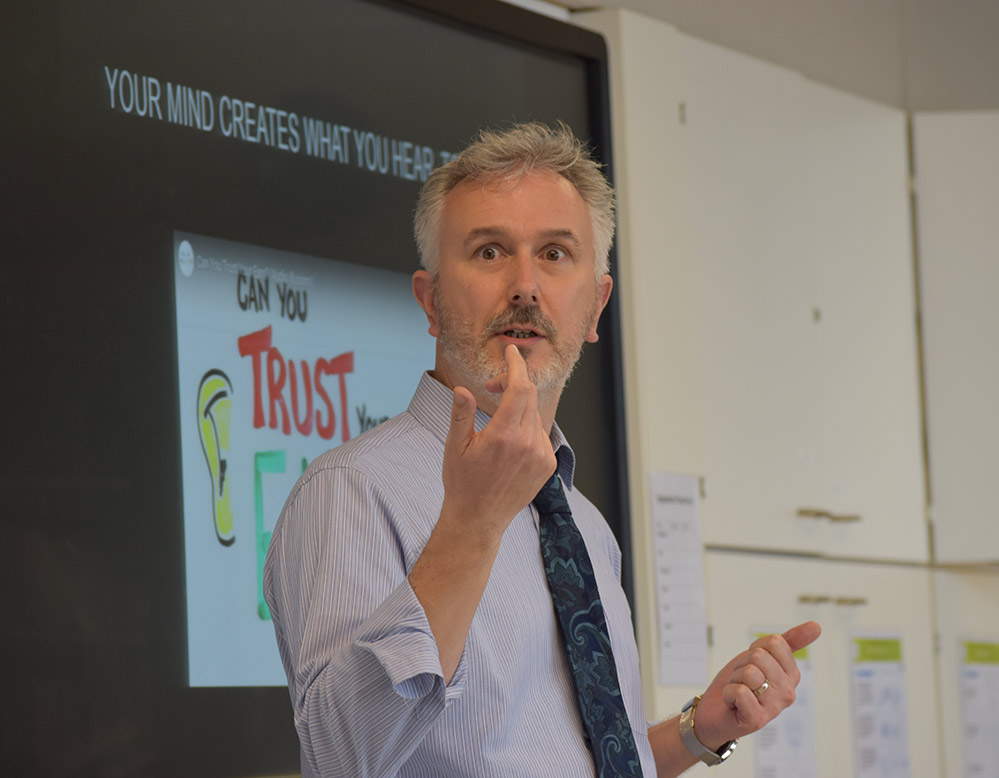 Pupils from across Alleyn's School joined Head of Psychology Stephen Keeler for a flight through the quirks of the mind.

Mr Keeler spoke about the way the mind works and the tricks it can play when interpreting varied sensory inputs. During a fact-packed hour-long session, he referenced the viral internet sensation of the dress that appeared either blue and black or white and gold to different viewers, the optical illusion of the Ames Room, phantom limb sensations, auditory confusion and much more.

To round-off the session, Mr Keeler talked about the plasticity of the mind and showed how new neural pathways form over time in response to learning and reinforcement. He gave the audience three final thoughts to take away:

One Upper School pupil said: "It was a fascinating presentation. I had heard about such things in passing before but have never had them explained in such detail."

Alleyn's Science Fortnight is an annual event which this year launched on Monday 4 March. Under the guidance of Director of Science Ben Jones the Department has lined up a fascinating array of talks given by in-house subject specialists and external visitors.

Topics include The Biology of Ageing from Alleyn's Biology teacher Dr Matthew Greetham, Living Plastic Free, and Plagues and Mankind. The School's Scientist-in-Residence Dr Kevin Fong will also participate, giving a presentation on The Science of Space Flight. The Fortnight will also include an inter-school Sixth Form Science Quiz.

The School's annual RV Jones Science Lecture will take place on the evening of Monday 11 March, with BBC Radio 4 Presenter Paddy O'Connell giving the talk The Science of Secrecy: The Story of RV Jones. Tickets are available from the MCT at Alleyn's website.

More about Sciences at Alleyn's via the following links: Biology, Chemistry, Physics, Psychology