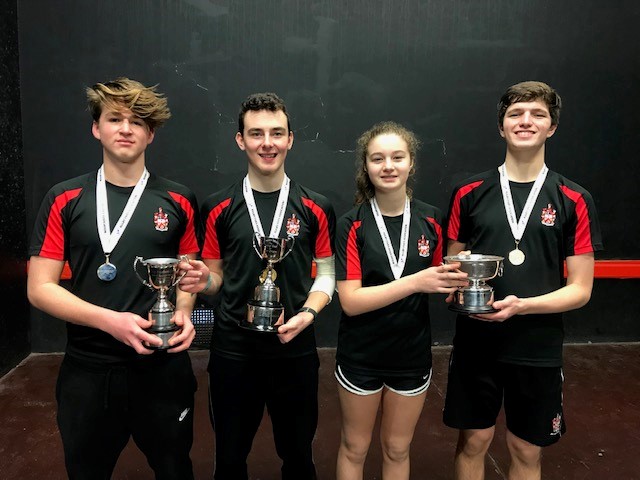 The Alleyn’s fives team dominated to win three of the four competitions, held at Sherborne School on 5 and 6 January, 2019.

Year 10 pupil Gwydion became the youngest player ever to win a major Open school’s fives championship in the Senior Open competition. It was an all-Alleyn’s final with Year 13 Alex the runner-up.

The boys then joined forces in a formidable partnership in the Senior Open doubles competition. Playing together for the first time, they conceded only a few points against each of the strongest and most established pairings from St. Pauls, Winchester and finally Merchant Taylor’s Schools, and won the final event without conceding a set.

For the first time in the competition’s history a mixed pair won the U16 doubles competition when Year 10s Stuart and Martha defeated St Paul’s School in the final. In doing so, Martha became the first girl ever to win a medal at this major championship.

In the U16 singles competition, Prutthik and Stuart both lost narrowly in the semi-finals, whilst Martha reached the plate final.

Alleyn’s Senior Deputy Head, Mr Andy Skinnard, said: “Alleyn’s prides itself on the many and varied opportunities it provides for boys and girls of all ages and levels of ability through sport. This is a fantastic result for our fives players. The pupils have shown great commitment to the sport and deserve every success.”

Sport at Alleyn’s is delivered co-educationally with a deliberate focus on building positive attitudes and mental attributes that will set our pupils in good stead for every aspect of School life and beyond. With these characteristics as our foundation, technical proficiency, tactical awareness and understanding are developed through a well-executed late specialisation model; guarding against the risk of burn-out, while allowing for breadth of experience and the growth of transferable skills at the start of a child’s time with us.