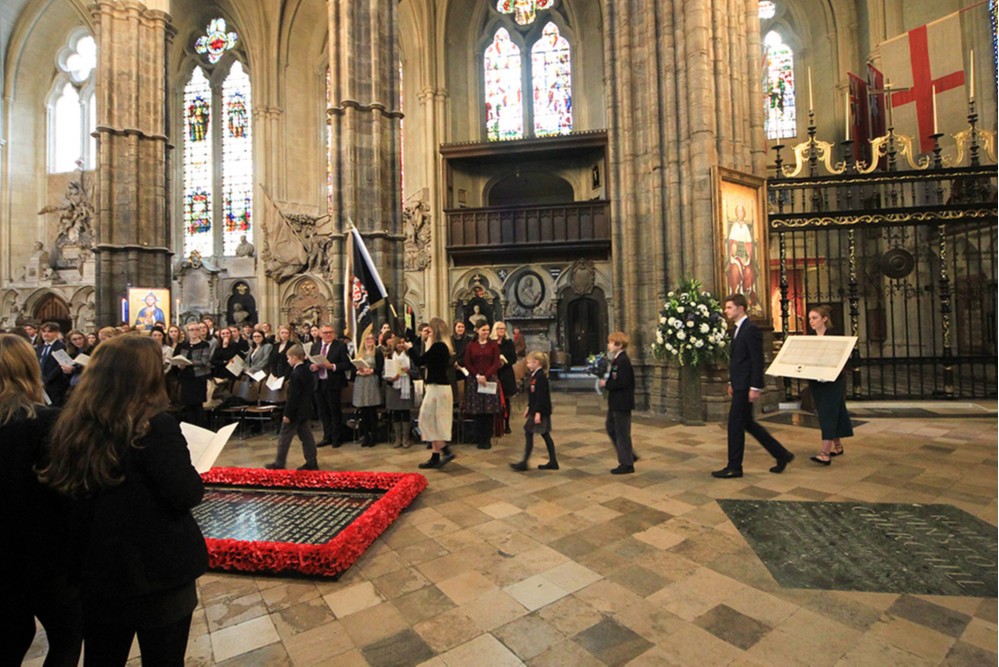 On Friday 18 January 2019, the Alleyn's School community came together to participate in a Service of Thanksgiving and Commemoration at Westminster Abbey in Central London, to mark the four hundredth anniversary of Edward Alleyn's College of God's Gift.

Alleyn's Junior School and Senior School pupils were joined by staff, governors, alumni and other special guests including Dobrinka Tabakova, eminent composer and Alleyn's alumna, whose new School anthem was premiered at the event to great effect.

The service was conducted by The Very Reverend Dr John Hall, Dean of Westminster, who gave the Sermon. Captains of both Schools process down the aisle with significant items to represent Alleyn's and its history. These were: a bouquet of cornflowers, reportedly Edward Alleyn's favourite flower; a newly commissioned School flag; and, by kind permission of the Governors of Dulwich College, The Foundation Deed of the College of God's Gift.

Headmaster Dr Gary Savage gave the Exhortation, in which he said: "As your Headmaster, I want us all to cherish the past, and the present it has led us to; but also to meet the future with courage, tenacity and with confidence in the power of education to shape our world, and ourselves, for the better."

Alleyn's Director of Music, Chris Dearmer, directed the combined choirs of Alleyn's School, who sang the service; and Martin Rockall directed the brass ensemble as they played Gabrieli's Sonata pian' e forte from the medieval triforium, 50 feet above the Abbey's floor.

The service also marked the launch of The 400th Anniversary Campaign: Growing Bursaries for the Future; a fundraising campaign created in support of the School's aim to extend its provision of means-tested bursaries to 20% of pupils in the future.