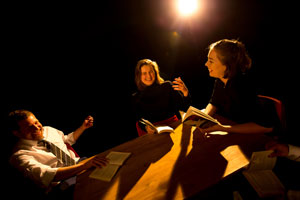 Form Tutors are at the heart of the school's pastoral system.

They oversee the academic progress and welfare of pupils in their tutor group. They have regular daily contact with pupils during morning and afternoon registration and, with support from specialist staff, implement the PSCHE programme during tutor-time.

Lower School pupils (Years 7 and 8) have the same Form Tutor for two years, and work under the guidance of Mr Stuart Turner, Head of Alleyn's Lower School. Form Tutors encourage and support all pupils to make new friends quickly and give them the confidence to concentrate on making their own positive contribution to the life of the School.

Pupils going into Year 9 will join one of eight Houses which form the tutor groups in the Middle School (Years 9-11). The Housemaster will be their Form Tutor in Year 9, which enables them to get to know the pupils who will be in their House for the next five years. In Years 10-11 pupils remain in their House group, with a new Form Tutor who will oversee their progress to GCSE and who works closely with the Housemaster. In Years 9-11 Form Tutors are under the overall direction of Mrs Melanie Joel, Head of Middle School.

In the Upper School (Years 12-13) pupils are assigned to new tutor groups, which facilitates the integration of pupils joining Alleyn's from other schools as well as offering membership of a new tutor group for existing pupils. Each Upper School tutor group consists of pupils from two of the eight Houses. The pupils' new Form Tutor works in conjunction with the Housemasters who have known the pupils since Year 9. Dr Rob Atkinson, Head of Upper School, oversees this section.

If parents have any concerns they are encouraged to raise these at the earliest opportunity with the Form Tutor.